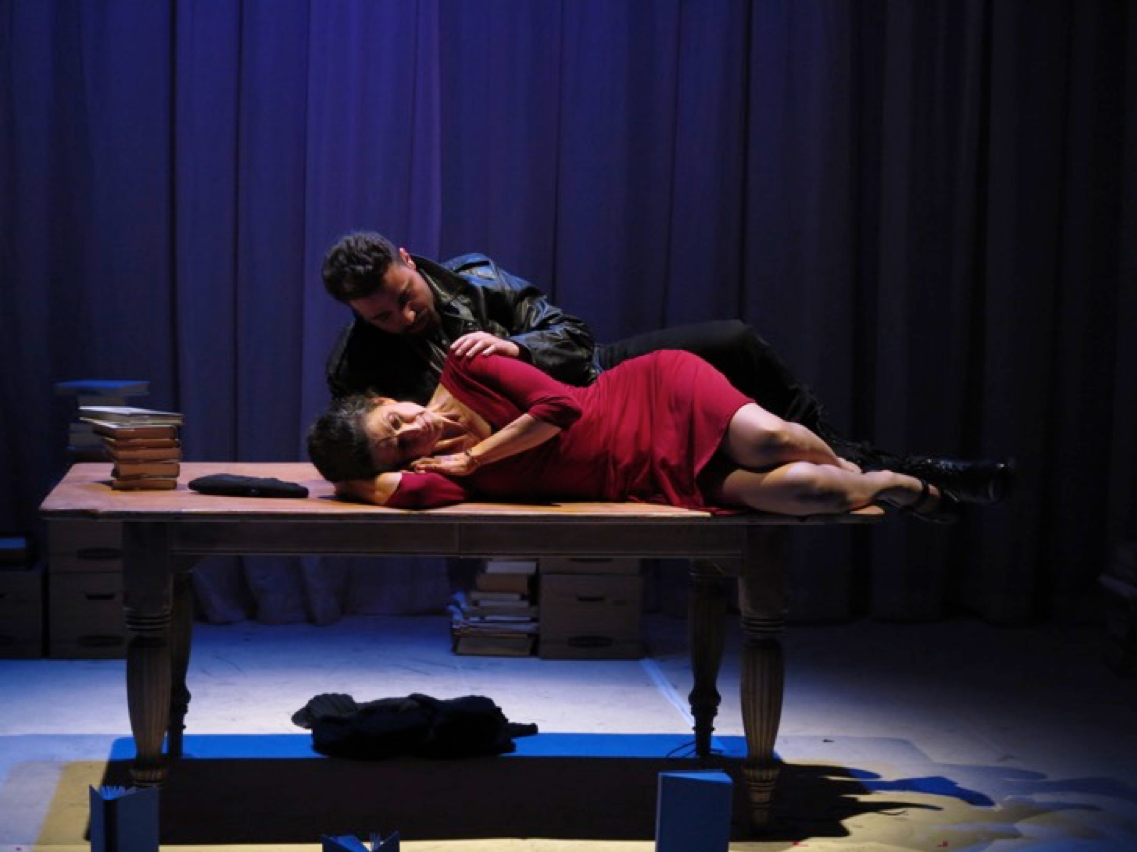 A Jewish-Cuban young man sets out to recover memories of the S.S. St. Louis, which in 1939, left Nazi Germany for Cuba filled with Jewish refugees but was turned back by Cuba, the U.S. and Canada. He seeks out a prominent, elderly, German-born woman novelist who, in her youth, loved a Jewish man who was a passenger to Cuba on the ship. In this play of obsession and despair, Cruz lures three characters into a sea of darkness so they can find a unity of souls through their relationship with history and literature.

Nilo Cruz is a keen observer of behavior, but his characters’ actions are simply the outer layer of what the Pulitzer Prize-winning playwright explores in his impressive body of work.

Cruz’s territory is the soul, that inner life in which dreams, desires and disappointments reside. His exquisite, dreamlike new play Sotto Voce probes the entanglement of past and present. And it looks at how crippling, repressed pain can suffocate the spirit.

Sotto Voce, which has nearly sold out its lamentably short run at Miami-Dade County Auditorium’s On.Stage Black Box, is not a history play, though a cruel incident from World War II helps drive the drama’s action. The 1939 voyage of the St. Louis, which carried 937 Jewish refugees away from the hell of Nazi Germany, became a doomed quest for asylum as first Cuba, then the United States and Canada turned the ship away, sending the passengers back to Europe and a quarter of them to death in concentration camps.

Cruz gives two of the three characters in Sotto Voce connections to the St. Louis. Bemadette Kahn (Franca Sofia Barchiesi), a famous German-born novelist living in New York, lost her Jewish first love Ariel Strauss and his sister Nina to the St. Louis tragedy. Saquiel Rafaeli (Andhy Mendez), a student from Cuba, has become immersed in a St. Louis research project, in part to honor his late grandfather, whose sister perished after being denied entry into Cuba. That project has yielded a cache of love letters from Bemadette to Ariel, so Saquiel has traveled to New York to meet the reclusive author.

The poetry of Cruz’s writing is what those who love his work cite most often about his style, and Sotto Voce has that. Yet it also contains passages that are realistic, whimsical, sensual and heartbreaking. Cruz may be that rarity, a poet of the stage, but he is first and foremost a dramatist.

Sotto Voce has been brought to vibrant life by its New York cast, which also includes Arielle Jacobs as Lucila Pulpo, Bemadette’s spirited Colombian maid and companion. She and Mendez supply the play’s flirtatious fun and its overt passion, and the two get to demonstrate their versatility by briefly portraying the 1939-era Nina and Ariel Strauss, German accents and all.

Barchiesi is genuinely mesmerizing. Using the powerful instruments of her lithe, graceful body and her musical speaking voice, the actress explores and expresses Bemadette’s every emotional nuance. She makes the powerful connection between Bemadette and Saquiel — a non-physical bond experienced through conversation and email — entirely plausible and engrossing. She jumps from the weightless delight of an older woman imagining an excursion with the attentive Saquiel to realizing the crushing weight of the loss that has never left her. She’s amazing.

And so is the lovely, lyrical Sotto Voce, which too few Miamians will get to see. The legendary director Peter Brook will be directing a French version of it in Paris in the future, with other versions to follow. But even without his involvement, Sotto Voce is a play with a future.